Flares are combustion devices used to burn off associated, unwanted or excess combustible gases during many industrial processes, such as oil and gas extraction, refineries, chemical plants, coal mines, bioreactors, and landfills. Flares are used both as safety (pressure relief) devices and as emissions control devices.

Based on tests conducted in 1982, EPA concluded [1] that properly operated flares achieve good combustion efficiency (e.g. greater than 98% of VOC are converted to carbon dioxide).

However, it was noted that flares operated outside of the “flame stability envelope” could produce lower combustion efficiency, leading to venting (greater than the 2% legally allowed) of harmful organic compounds to the ambient atmosphere [2]. The code of federal regulations subsequently adopted provisions in attempts to define the flame stability envelope, including 40CFR60.18 [3] and 40CFR63.11. The regulations include presence of continuous pilot flames for proper ignition, minimum LHV (lower heating value) of the flare gas, maximum exit velocity and limit for visible smoke.

Volatile Organic Compounds (VOC) are EPA-regulated harmful air pollutants, both as precursors to Particulate Matters and smog, and as potent greenhouse gases (GHG). For example, methane warms the planet 86 times faster than Carbon dioxide in a time frame of one to two decades, according to IPCC [4]. When flares convert greater than 98% of VOC gases to carbon dioxide, they not only reduce the smog-causing air pollutants, but also reduce the effects of greenhouse significantly. When critics point out flaring as a “wasteful” practice, they often forget the positive contributions from flares to the environment.

As oil and gas producers and processors are rushing to adopt ambitious plans to reduce emissions, they often overlook flares’ roles in these efforts. Flares, if not properly designed or operated, could lead to large emissions of harmful pollutants. The regulators (e.g., state DEQs) are taking notes and adopting state of the art emissions detecting methods, such as Optical Gas Imaging (OGI)  cameras, to detect purported non-compliant emissions from flares, especially those used in upstream oil and gas production, see Figure 1. The 98% combustion efficiency can no longer be treated as a given in light of recent enforcement trends.  It is very important for flare operators to adopt the best available flare designs and control methods in their efforts to achieve Environment, Safety and Governance (ESG) goals. Adopting the best flaring technologies should be the first step in building confidence with the public and the shareholders. 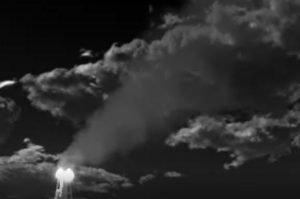 Figure 1. Image capture from a video of a conventional air flare taken by an OGI camera.

Over-Aeration and Venting of VOC

Since 2000, regulators and academicians continued to study and learn more about the “flame stability envelope” of flares. In the first decade of 21st century, it was discovered that some flares compliant with the letters of 40CFR60.18 and 63.11(b) did not always produce high combustion efficiency. Factors were identified to have adverse effects on combustion efficiency, including over-steaming for steam assisted flares, over-aeration for air assisted flares, high wind, and flame liftoff.

TCEQ issued a report in 2011 for tests conducted in 2010 to further understand the “flame stability envelope” of flares [5]. Over-aeration of flares was found to cause low combustion efficiency [6]. New regulations 40CFR63.670, also known as the Refinery Sector Rule7 (RSR), were put in place to safeguard against over-aeration of flares used in refineries. The RSR (January 2019 version) mandates a NHVCZ ≥ 270 Btu/scf, based on a 15 minute block average, when regulated material is being routed to the flare for at least 15 minutes. For flares actively receiving assist air, NHVdil must be greater than or equal to 22 Btu/ft², when regulated material is being routed to the flare. NHVCZ is the net heating value in the combustion zone, NHVdil is the net heating value after dilution. In addition, the owner or operator of a flare is required to install, operate, and maintain a monitoring system capable of continuously measuring, calculating and recording the volumetric flow rate of flare gas, flare supplemental gas, and assisting air.

Refinery flares operate under very different conditions compared to flares used in the upstream oil and gas production. Unlike those routed to refinery flares, flare gas compositions are much more predictable in upstream applications.  For example, associated gas (aka HP gas) from oil extraction has a typical LHV greater than 1100 Btu/scf. Tank vapor from storage tanks (aka LP gas) often has a LHV greater than 2000 Btu/scf, not far from the LHV of propane.

Recent DEQ enforcement trends in various states suggest more scrutiny on how air assisted flares are operated in response to flare gas flow rates. In order to meet the increasing stringent regulations, proactive flare operators are looking for better flare designs and smarter control technologies. To this end, several areas of improvement have been identified as future technology trends in flaring. First, flares that minimize the amount of assisting air are sought to help alleviate the potential of over aeration. Second, greater emphasis has been placed on active monitoring of flare gas flow rates, especially the LP tank vapor. Third, VFD drives are becoming a must for blower control rather than single speed or two speeds. And last, intelligent control algorithm that optimizes the supply of blown air according to the flow rates of HP and LP gas is being adopted by proactive flare operators.Minimizing the Raw Power of Air Blower

Over-aeration is well understood to be a potential cause for the loss of combustion efficiency. It is logical to reduce the power of the air blower used for the air flares as much as possible.  This is, however, not a simple task of substituting a large blower with a smaller one, since the regulations on visible emissions (smoke) are still a constraint.

The task is to increase the efficiency of the flare design so that the flare can operate smokelessly at all time, while minimizing the power requirement of the air blower. This can be done using advanced methods for smoke suppression, such as mixing enhancement, Coanda thin film effects, nozzles with variable areas, etc.Monitoring the Flow RatesIn the applications of upstream oil and gas production, the flow rate of the HP flare gas (associated gas from oil production) is typically measured using flow meters, due to the fact that the HP gas is usually sold to a transfer pipeline when the pipeline is available at the location and has enough takeaway capacity. On the other hand, the flow rate of LP gas (tank vapor) is sometimes not measured. The intermittent nature of the LP gas release adds to the difficulty of controlling the flare for optimum combustion efficiency. In order for the intelligent controller to optimize the speed of the air blower of a flare, the LP flow needs to be measured in real time.Smart Control of Air flareVFD drives can be used to control the speeds of air blowers in accordance of flare gas flow conditions. With increasingly stringent regulations and enforcement, it is expected that VFD drives will be used more widely in the near future. Single speed and two speed motors are going to lose market shares due to their limited flexibility. Equipping an air flare with a VFD drive is only the first step toward achieving low emissions. The control algorithm for the VFD is the key to optimize the combustion efficiency of air flares. If the blower speed is set too low, the flare might smoke, violating the limit for visible emissions in 40CFR60.18. On the other hand, if the blower speed is set too high, the flare flame might become unstable or even extinguished. The control algorithms for air flares are not trivial, especially when the flare has multiple vent streams (HP and LP tandem configuration in one flare). Today flare vendors are actively developing hardware and software in this area to meet the challenge. Since flare gas flow rates may vary wildly over time, the intelligent controller will have to monitor the flow rates in real time and adjust the VFD drive of the air blower accordingly. The VFD drive cannot be set at a fixed frequency and left un-attended for a long period of time, if the flare gas flow rates are expected to vary wildly in the same period.Flares Suited for Reducing Fugitive EmissionsOne type of flare is particularly suited for the purpose of reducing fugitive emissions in upstream oil and gas production. These flares are designed to handle a HP stream (associated gas) and a LP stream (tank vapor). The HP stream utilizes a spring-loaded Coanda nozzle to achieve smokeless combustion without the need of any assist air. Figure 2 shows a CFD simulation of such a flare design (gas assisted instead of air assisted). The LP stream is discharged through an annulus surrounding the Coanda nozzle to maximize the mixing with the ambient air. Only the LP stream requires assist air (or assist gas) in this design. For this reason, this flare can have up to 90% reduction in the horsepower and capacity requirement of the air blower, compared to a conventional air assisted flare, in which the air blower is designed to supply combustion air for both the HP and the LP streams.  Such a flare often includes a secondary flare enclosure to ensure the flare complies with the velocity limit required by federal regulations on flares (such as 40CFR60.18). Figures 3 and 4 show such a 70 ft flare capable of handling 54 MMSCFD of HP associated gas and 2 MMSCFD of LP tank vapor. 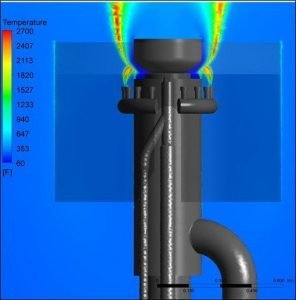 The reduced capacity of the air blower thanks to the advanced design reduces the likelihood of over-aeration of the flare flame. The control logic for the VFD drive for the blower is significantly simplified as well since the control does not rely on the flow rate of the HP stream. The VFD frequency is only a function of the LP flow rate. The flare can be demonstrated to meet and exceed the 99% CE when the proper VFD control algorithm is put in place. A 99% CE means a 50% reduction of the emissions of harmful air pollutants such as VOC and CO, when compared to 98% CE commonly assumed for flares. 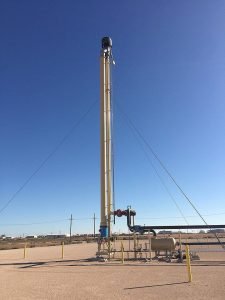 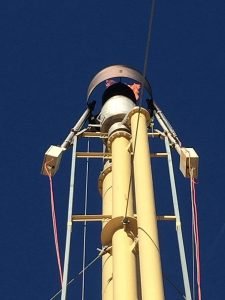 Figure 4. A Close Up of the DreamDuo Air Flare With the Blower Off.

Regulators are adopting new technologies to scrutinize the emissions from flares, especially those used in upstream oil and gas production. Flare technologies are evolving rapidly in response to this regulatory environment. Four technology trends have been identified to meet the challenges in flaring. A state-of-the-art flare design especially suitable for reducing fugitive emissions is presented. 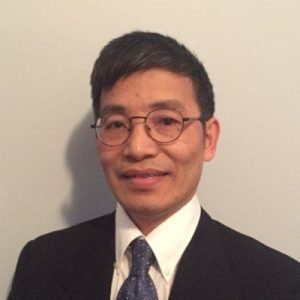 Jianhui Hong, Ph.D., currently works as Director of Technology and Product Optimization for Cimarron. His areas of expertise include combustion, air pollution control, heat transfer, fluid flow, patenting, software tools for engineering designs, optimization, product development and engineering management. Jianhui is an innovation leader with a proven track record of developing cutting edge technologies. He holds numerous US and worldwide patents for inventions, many of which are still best sellers in the market. Jianhui is passionate about protecting the environment by reducing emissions.

Please enter your  information in order to download our 2021 Sustainability Report.

Enter your contact information in order to receive the design datasheet