A VRU, or vapor recovery unit, is a compression system used to collect and compress low volume gas streams for injection into the suction of a larger compressor, a meter run, a local site fuel gas system or directly into a gas gathering line. Mechanical VRUs consist of a driver motor or engine that supplies the power to the compressor. They are often used by oil and gas operations to recover vent gas.

The USEPA and State environmental regulatory agencies use a default capture efficiency of 95%. Greater capture efficiencies in air permit applications can be claimed if the system meets certain criteria.

To claim a 95% capture efficiency for a VRU in Texas, the VRU must:

To claim 100% capture efficiency for a VRU the applicant must satisfy the following additional design parameters:

The most commonly used mechanical compressors used for VRUs include:

This is important for NSPS OOOO/OOOOa compliance because the emissions recovered (and not emitted to the atmosphere) are not included in the potential to emit (PTE) calculations for a storage tank. This helps ensure a company can meet the 6 tons VOC per year per storage tank emissions limit.

The Vapor Jet System is used for recovery of vent gas from oil and gas production facility storage tanks. The process utilizes a pump to pressurize a stream of produced water to serve as the operating medium for a jet pump. The potential energy (pressure) of the produced water stream is converted to kinetic energy (velocity) in the jet pump. The high velocity water stream entrains the near atmospheric vent gas vapors and returns them to the facilities’ low pressure system for separation and sale. The water is then returned to the water storage tanks for further de-gassing and reuse in the Vapor Jet System process, disposal or injection.

Variable frequency drives (VFD), also called variable speed drives, adjust the speed of the mechanical compressor driver based on the flow of gas to the VRU. This increases the turndown ratio and so increases the operational range of gas the VRU can effectively recover. As VRU applications can have relatively large fluctuations in volumes and pressures, the VFD can provide the overall system a larger degree of operating flexibility.

The VFD allows the compressor to more quickly respond and recover increases and decreases in the flow of gas to the VRU over a short period of time.

Where and when possible, consider measuring the flowrate of vent gas from the emission source. HY-BON/EDI uses its IQR Emission Survey to measure vent gas flowrate using turbine meters or thermal mass flow meters. Optical Gas Imaging (OGI) cameras are used to ensure no leaks occur from tank hatches and PSVs during measurement.

Measurement of actual flowrate of vent gas is valuable for sizing, design and operation of a VRU. This can be valuable for the following reasons:

Applications for natural gas vent gas sources that are “wet” (containing natural gas liquids) require a scrubber (separator) vessel to collect free liquids that might condense out upstream of the compressor inlet.

Crude oil/condensate storage tanks typically have high BTU vent gas (greater than 1500 BTU/SCF) and will have more free liquids that should be removed prior to sending the gas to the VRU compressor.

Depending on metallurgy of the VRU, the following ranges can be handled.

Piping connecting the storage tanks and VRU or vapor recovery towers (VRT) and VRUs, (referred to as the Closed Vent System (CVS) by NSPS OOOO/OOOOa) should operate with no detectable emissions.

Closed vent system piping from the storage tank to the VRU should slope downward (20 degrees or greater) toward the scrubber upstream of the VRU.  This applies to piping from a VRT to a VRU.  This ensures that liquids that condense in the piping can be gravity-fed back to the VRU inlet scrubber and so help keep the piping clear.

The VRU is configured to stop and start automatically, depending on the pressure in the tanks. A properly designed VRU must include a bypass system that will initiate automatically and divert the discharge volume back to the suction scrubber. This process allows tank pressure to build back to the point at which compression occurs. If the pressure continues to decrease while in the bypass mode, the unit will shut down and wait in standby for the start pressure to be obtained.

Properly designed VRUs are also configured to shut down before any type of vacuum is reached to avoid pulling oxygen into the tanks or imploding them. If air (oxygen) is pulled into

the system, it is typically caused by an improperly designed package (no bypass system or improper pressure settings), improperly sealed tank hatches, or leaking relief valves. These

units actuate on pressures as small as 0.5 inches of water column (0.019 psi), and most packages used in typical oil field compression are simply not able to calibrate to these minute

pressures. With a correctly designed package, the addition of a properly designed gas blanketing system on the tanks can alleviate the majority of any other issues that could cause oxygen ingress.

Either rotary screw or rotary vane compressors are strongly recommended for crude oil/condensate storage tank applications because of their ability to effectively handle wet gas. Reciprocating compressors are good machines for use in dry gas applications, but they are always not recommended for VRU service for wet gas. Wet gas tends to foul the valves and seats in reciprocating most compressors, and condensate can fall out in the crankcase and compromise the lubricating oil, resulting in component failure. 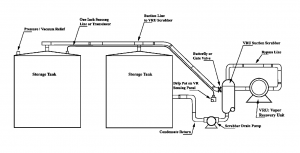 A backup ECD or flare can combust the gas during times the gas is not recovered by the VRU.

Backup emission controls help ensure the facility can continuously meet NSPS OOOO/OOOOa limits for storage tanks and facility State site specific air permit limits. They can also help avoid the need to report upset, bypass and emergency air emissions that would occur if the gas was not combusted.

NSPS OOOO and OOOOa require initial and annual inspection for leaks from the closed vent system of VRUs (and enclosed combustors and flares) used to control an affected storage tank.

Cimarron’s acquisition of HY-BON/EDI in July 2019 means that our environmental product and services offered to our oil and gas customers are further strengthened. This includes the following:

Please enter your  information in order to download our 2021 Sustainability Report.

Enter your contact information in order to receive the design datasheet